This is the sad state of American agriculture

For today’s dose of horrifying news, the poultry industry comes up big: According to a new report by Oxfam America workers at some poultry plants across the country face abysmal working conditions where they are denied bathroom breaks and often soil themselves while working so as not to lose their jobs.

Debbie Berkowitz, who is recognized in the acknowledgments of Oxfam’s report, detailed some of the reports findings in an article in Quartz. Among what she has observed in poultry plants: “Poultry workers stand shoulder to shoulder on both sides of long conveyor belts, most using scissors or knives, in cold, damp, loud conditions.”

Employees at plants in Arkansas, North Carolina, and Delaware, among other states, reported that they were not permitted to leave the processing line to use the bathroom, and many said they wore diapers to work to deal with the problem.

“Poultry workers are humiliated, degraded, and put at risk of serious, painful health issues including urinary tract infections, because supervisors are under pressure to keep up production,” Berkowitz wrote.

Oxfam is launching a campaign to address the health and safety issues workers face in chicken processing plants, and the organization was set to rally in front of Tyson’s Arkansas headquarters Wednesday. Tyson Foods did not respond to requests for comment on the report. 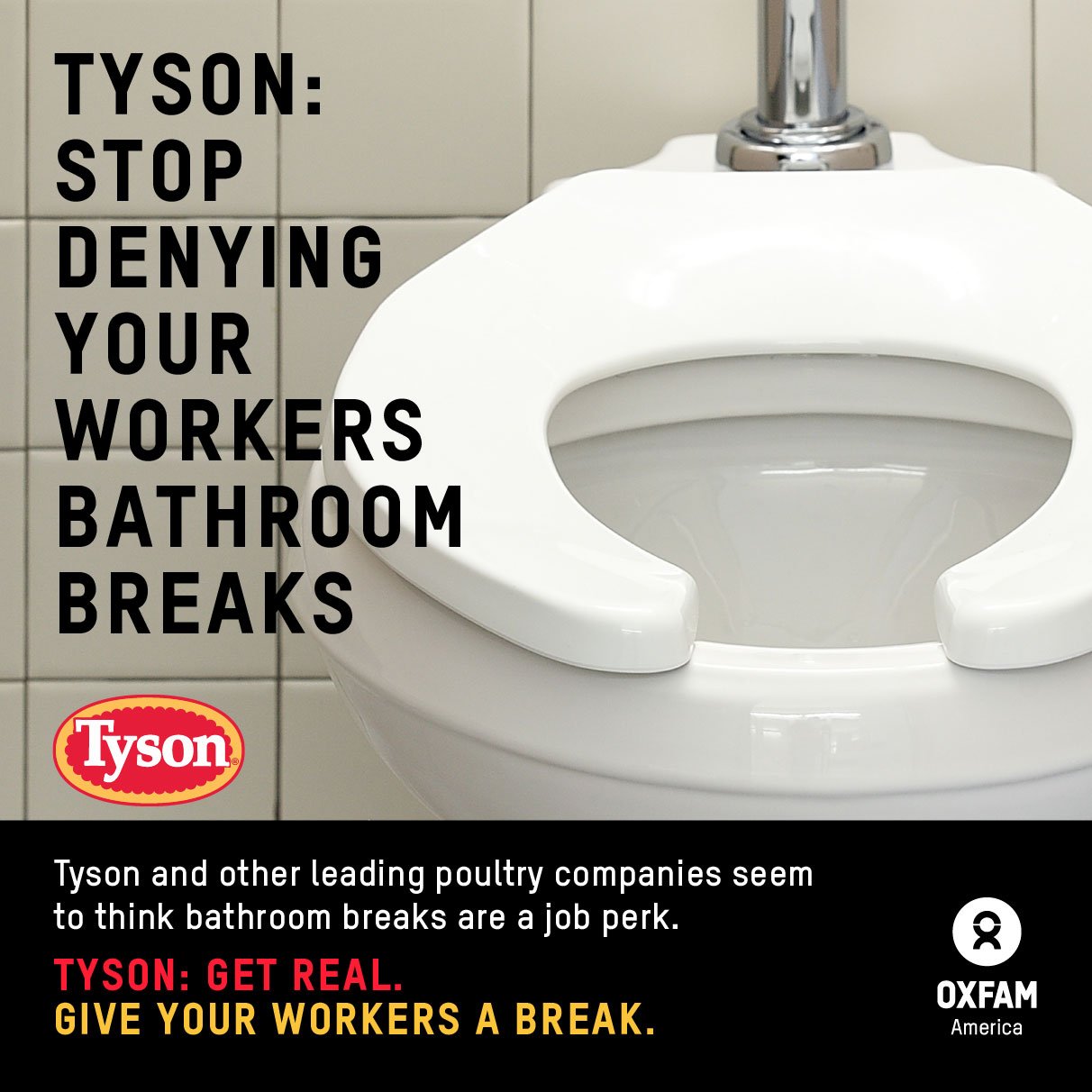 .@TysonFoods: let your workers take bathroom breaks when they need to! #GiveThemABreak

Unseen labor conditions trigger problems across the industry. Last year, questions arose over whether restaurants in the U.S. were serving slave labor shrimp, and many are calling for more transparency at all levels of the supply chain.

The organic revolution has also coincided with a gluten-free revolution, but there are still millions of people who love their bread way too much to ever give it up.

Our bread has changed in many different surprising ways over the years, but there are plenty of breadmakers doing it the right way that have sprung up as consumers demand healthier, non-GMO and organic choices.

Of the new guard of breadmakers the emerging big organic brands like Rudi’s and Ezekiel (sprouted grain breads) stand out, but another fast-growing option customers are falling in love with is Oregon-based Dave’s Killer Bread, which makes everything from whole grain to sprouted breads and even hamburger buns.

With its signature buff guitar-playing hippie mascot (a likeness of co-founder Dave Dahl), the bread has the look, feel and even the taste of a small-time artisan outfit.

But things are changing in the world of organic food, and news has broken that Dave’s will be purchased by a not-so-trustworthy company that’s shelled out hundreds of thousands of dollars against GMO labeling.

Among companies that have donated against the mandatory labeling of GMOs (a right afforded to citizens of 60+ countries), the little known Flowers Foods of Atlanta has been one of the worst offenders.

Out of a list of 68 companies spending big money to stop GMO state labeling bills, Flowers checks in at number 37. They shelled out a cool $250,000 to stop labeling Colorado, over $100,000 more than the pro-GMO agricultural behemoth Cargill (see chart below).

Counting Wonderbread, Sunbeam and several other mainstream breadmakers among its list of brands, Flowers Foods is firmly invested in unhealthy, processed and GMO-laden bread companies.

But now, they’ll be adding one of the most trustworthy organic brands in Dave’s Killer Bread to their portfolio.

Will change come, or will Dave’s maintain its signature level of quality?

That was the “55 million dollar question” for the company’s founder Dahl in this interview.

“What do you tell the folks who say Killer Dave sold out?” asks John Sepulvado.

“But we also sold out to an opportunity that is the next step for this brand. In this industry if you just stand still and rest on your laurels you’ll get eaten up.”

Dahl will not be involved in the company, however, so it’s fair to wonder if it will be the same without the man who taught himself how to make bread and conquered the farmer’s market circuit, creating a new standard of healthy and delicious, versatile bread that’s beloved by organic food lovers across the country.

Dave’s Killer Bread is just one of several top organic brands (see this list to see if your favorite is here) that have “sold out” recently.

While most of the companies have continued to operate the way they have in the past, others have been caught tampering.

For example, the Silk almond and soy milk brand was called out for double-crossing its founder Steve Demos and switching to likely GMO soybeans without telling customers; they eventually became Non-GMO Project Verified due to an outcry, but the memory lingers.

Invetiably, it stands to reason that a company like Flowers whose top brands use GMO ingredients and even used the infamous “Subway yoga mat” chemical in the past will have a hard time ensuring the same level of organic quality in a product like Dave’s.

But that just underscores the need to keep supporting the little guys, and to stay one step ahead of Big Food in their quest to make GMOs and unneeded chemicals the “new norm.”

It’s hard to fault “Killer Dave” too much considering the hefty sum he received for his company, but does that mean we should continue to support it?

Dahl’s story is one of redemption; an incredible journey (see the video below) in which he managed to overcome addiction and personal struggles to create an amazing, and healthy, product.

And if you’ve ever tried it before, you know his company really does make a “killer” loaf of organic bread.

But at the end of the day it’s more than fair to wonder if it’s time to move on and support another company, one that won’t be handing over profits to a bigger fish that wants to squash our long-awaited Right to Know what’s really in our food.

What Others Are Reading