This summer, many parts of southern Ontario faced drought conditions. Yet Nestlé, a giant bottled water corporation, continues to pump more than four million litres of groundwater every day from an aquifer near Guelph. Nestlé pays just $3.71 per one million litres (less than $15 per day) for this water and then ships it out of the community in hundreds of millions of single-use plastic bottles for sale all over North America – at an astronomically marked up price.

Between 2011 and 2015 the aquifer that supplies the main Nestlé production well dropped about 1.5 metres, while Nestlé’s water taking increased 33 per cent over the same period.

And Nestlé just bought another well in Middlebrook, Ontario – despite the local municipality’s attempt to purchase it to safeguard their municipal water supply. Nestlé has been making profit by pumping groundwater all over the world. Communities are standing up and saying “no” to Nestlé’s water grabs and profit making off of a shared community resource. 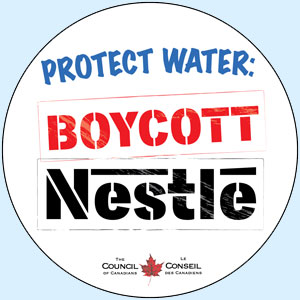 Nestlé’s operations in British Columbia have also stirred up opposition from communities trying to protect their water. Despite the 2015 drought, Nestlé continues to extract 265 million litres from a well in Hope, located in Sto:lo Territory. The well connects to an aquifer that approximately 6,000 nearby residents in Hope rely on.

Groundwater resources are finite. Droughts, climate change and over-extraction continue to impact our limited water sources. At this pace, we will not have enough for our future needs. Wasting our limited groundwater on frivolous and consumptive uses such as bottled water is madness. We must not allow groundwater reserves to be depleted for corporate profit.